While real estate professionals have expressed worry that the CMHC’s mortgage insurance premium hike will make purchasing more difficult for hopeful home owners, a long-time industry analyst stated that the decision is an important first step towards ensuring better affordability.

Last week, the CMHC increased the premiums on the mortgage default insurance that home buyers have to service if they put in less than 20 per cent for down payment.

In a recent column for The Globe and Mail, markets observer Rob Carrick described the housing industry’s response to the move as an attempt to score brownie points with the first-time buyer demographic.

“Expect this increase to be added to the grievance list of people who work in the real estate-industrial complex – agents and mortgage brokers, plus others who make a living from home sales. They are working hard to portray first-time buyers as martyrs to government policies designed to cool down the housing market,” Carrick wrote.

Carrick argued that the government, and not the industry’s self-interest, is better situated to effectively deal with the long-running affordability crisis.

“The wrong approach is to offer cosmetic, politically expedient help to young buyers that fails to address the reality that it’s way more of a burden to own a house than it is to buy one.” 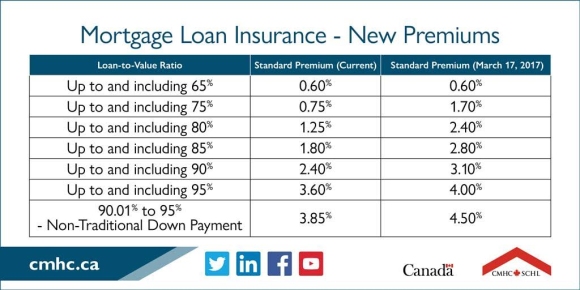 “[These] measures are not just necessary – they may also help to make houses more affordable by containing price increases or causing them to fall,” he added. “CMHC is increasing premiums to boost funds available in case there’s an economic shock of some sort and mortgage defaults soar. High house prices increase this risk because people must stretch their finances to get into the market and then afford the full array of costs as a homeowner.”

“Ontario is offering a limited break on land-transfer tax, while the B.C. government is offering loans to first-time buyers to help them put together a down payment on homes costing up to $750,000,” Carrick explained.

“Measures like these incrementally support more home buying, which in turns pushes prices higher. Worse, we end up helping people get into the market while ignoring the much more important question of how they’ll be able to afford their mortgage over the long term.”