The conversation around homeownership in Mississauga and surrounding cities has been a challenging one, especially as prices remain high across all housing types in the city and surrounding municipalities (in fact, the average 905 condo is selling for over $400,000 and has been for sometime now).

But while it’s frustrating for experts—and non-experts who entered the market years ago—to tell prospective homebuyers that they’ll have to move to find an affordable housing, some people might be interested to know that there are indeed still places in Canada that offer affordable homes for single buyers with more modest salaries.

And a recent Zoocasa report reveals where solo homeowners-to-be on a budget might be able to purchase a home.

“While having a dual-income household can greatly improve purchasing power and the ability to qualify for a mortgage, that’s not to say homeownership isn’t in the cards for single-income earning buyers. In fact, according to recent calculations by Zoocasa in celebration of Single Awareness Day (February 15), there are a number of markets where it’s possible to buy a home on one income – and even have money left over,” says Penelope Graham, managing editor, Zoocasa.

Graham says that, to determine which markets were affordable, the average and benchmark home prices were sourced from regional real estate boards. It was then assumed the buyer would make a 20 per cent down payment and take out financing with a 3.29 per cent interest rate amortized over 30 years, to determine the minimum income required to qualify for a mortgage on the average home.

Those findings were then compared to median income data of “persons living alone who earned employment income” as reported by Statistics Canada. 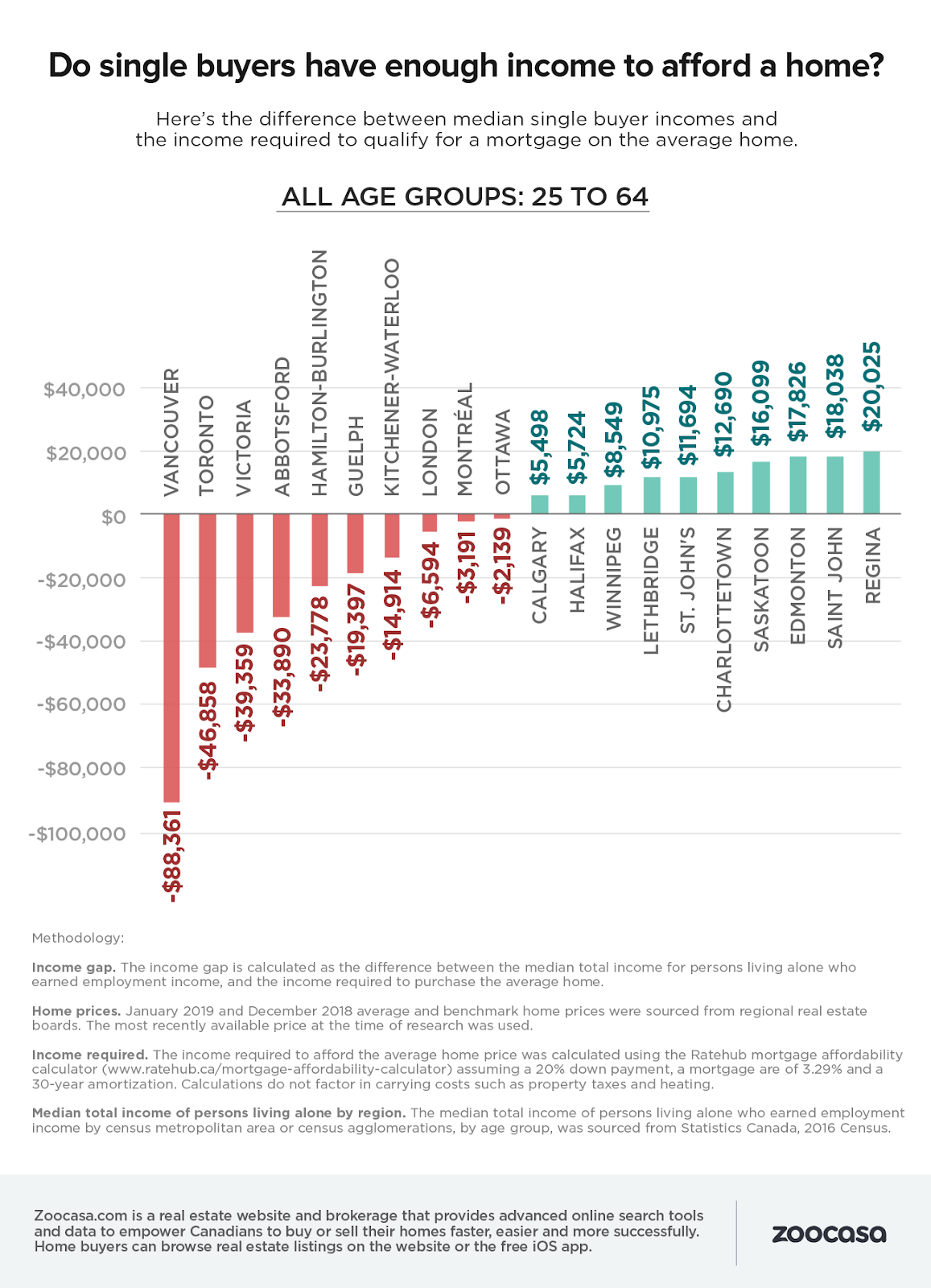 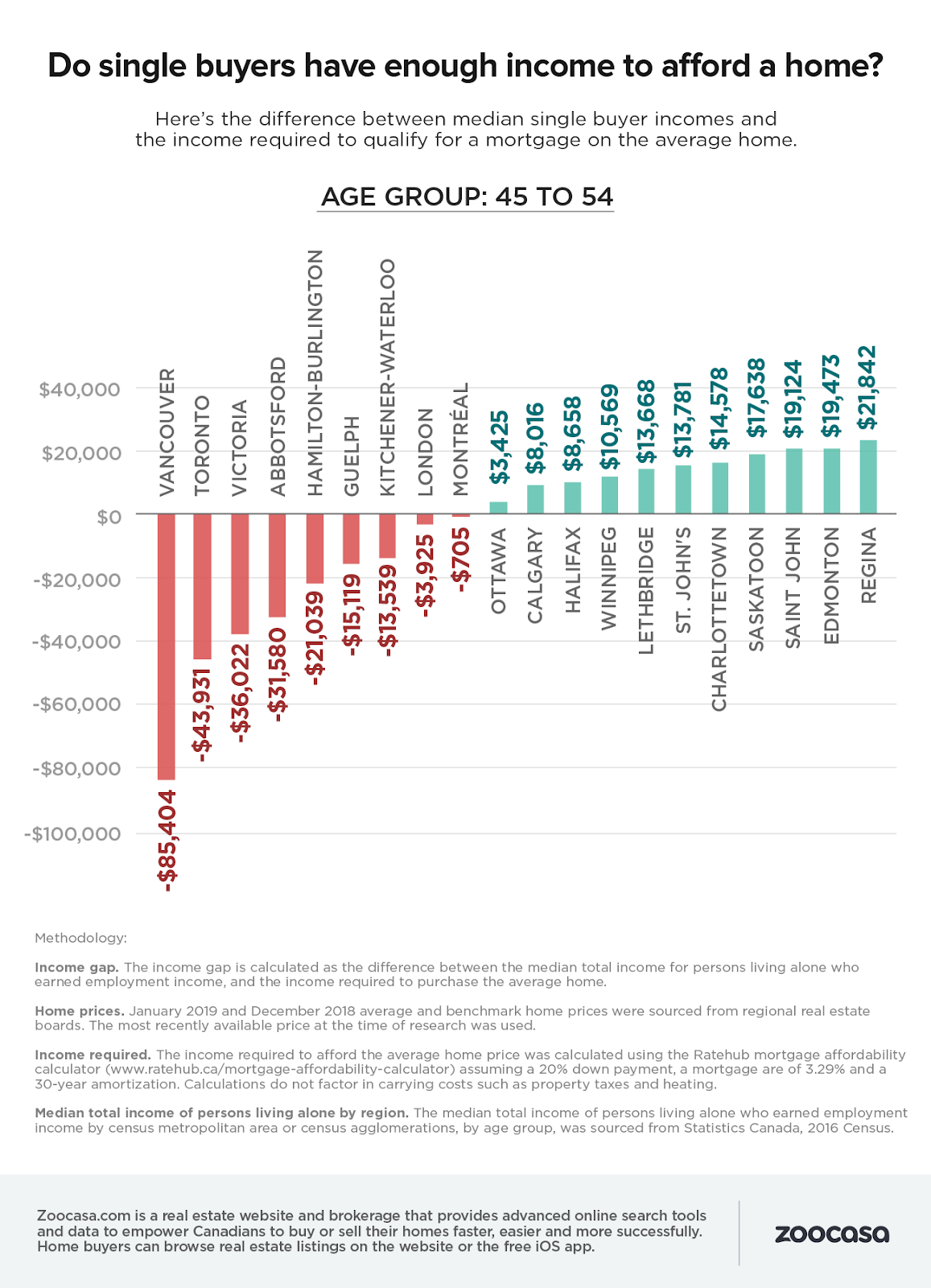 So, where can solo buyers most easily afford a home?

Overall, single home buyers will see the best bang for their buck in Eastern Canada and the Prairie provinces, with Regina taking top spot out of 20 cities for greatest affordability.

MLS listings in Calgary, Lethbridge, Winnipeg, and Halifax also fall within the realm of affordability for single-income purchasers.

So, where are single buyers less likely to purchase a home? As expected, Zoocasa says the Greater Golden Horseshoe (which includes Toronto and the GTA), is out of most people’s budgets.

Other markets not considered affordable for single buyers include Guelph, Kitchener-Waterloo, London, Montreal, and Ottawa.

Naturally, the housing market is more difficult for single millennials to navigate.

Zoocasa says the research also compared how earnings ranged by age group per location, and which demographic enjoyed the greatest affordability when purchasing a home. Across every market, Gen Xers (35 – 44 and 45 – 54 age brackets) enjoy the greatest earnings and purchasing power, with 11 markets considered within affordable reach (compared to 10 markets across all age groups).

Overall, single home buyers aged 35 – 44 purchasing a home in Regina enjoyed the greatest affordability of all, with an income surplus of $24,215. A millennial purchasing in Vancouver had the least, facing a gap of $92,774.

Check out the infographics below to see which Canadian housing markets are most affordable for single buyers, courtesy of Zoocasa.